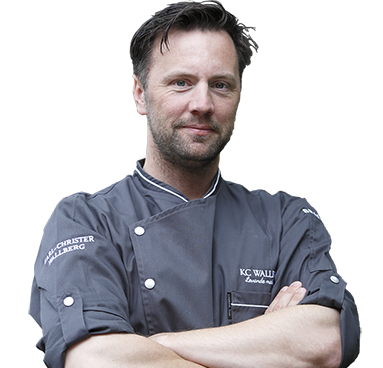 "Simplicity is the heart of a meal. Simplicity takes knowledge to produce, courage to comply with"

”Simplicity is the heart of a meal.
Simplicity takes knowledge to produce,
courage to comply with”

KC WALLBERG – A PORTRAIT
KC Wallberg is a well-merited chef and sommelier, holding a Bachelor´s degree in Culinary and Gastronomic Sciences, comprising a sommelier education equivalent to (WSET?) Diploma A and B.

KC Wallberg´s career is international. In Norway, he held a position as Head Sommelier in a wine celler, led by Master of Wine Arne Ronold, in the vicinity of Oslo. The aim was to develop a ”Relaise Château”, which was never built. Instead, New York became the next address and the opportunity for a job interview presented itself, with chef and restaurateur Marcus Samuelson. The interview only lasted about 15 minutes, and Marcus straightforwardly asked “what will you be doing after having worked for me?” A clever question, since the answer reveals the candidate´s ambitions. KC Wallberg became part of the opening team as assisting GM at restaurant “Riingo” (Japanese for apple) in New York, Marcus Samuelson´s first own restaurant after Aquavit (2003-2004). After that period, KC Wallberg joined Daniel Boloud at Upper East Side at “Café Boloud” (2004-2005).

The next step was either moving to Las Vegas for the opening of a new Boloud restarant or joining Gert Klötzke at the establishment Gripsholm in Sweden. KC Wallberg chose the latter and became part of a successful trio, together with Klötzke and Niclas Wahlström, that turned Gripsholm into a renowned restaurant. The Swedish National Team of chefs had training facilities at Gripsholm, an inspirational factor. The position at Gripsholm brought influences and became the starting point for a new approach and philosophy, still setting the standard – a genuine belief in nature and the natural touch in food and wine. With the right technique and advanced skills in cooking, no short-cuts or additives are necessary. Natural flavors are instead presented at their best.

Service regardless of class
KC Wallberg took another direction in life in 2008 and went from fine dining to a more common approach, with the ambition to cater for every day eating with first class service. He emphasizes that genuine service should always be present, regardless of social class, the amount on the restaurant bill or other circumstances. To be attentive and caring towards the guest is always essential.

New challenges
During 2008 KC Wallberg took over Restauration Gubbhyllan at Skansen in Stockholm, a restaurant he is still in charge of. After more than 10 years, the establishment will during 2020 see a face-lift, regarding premises as well as concept. The focus for food and cooking has always been on avoiding additives and prefabrication. As a result, at Gubbhyllan all bread, pastry and food emanate from the restaurant kitchen – even the lemonade. Game, organic meat and certified fish are products on the list.

The same philosophy was the guideline when KC Wallberg had the opportunity to also take over three ships, dating back to the early years of the previous century. These vessels are some of the most frequented for boat tours in Stockholm, each season shuttling approximately 250,000 passengers to the Royal Castle at Drottningholm. The vessels were the first to serve natural food, free from additives, from own kitchens on board and in certified restaurants.

Attitude regarding wine
During the years at Gripsholm, an interest in artisan wines and biodynamic wine making grew, and the restaurant took on this wine profile. A newly started business venture in the area, the first importer of biodynamically produced wines, came to be supplier. A close relation led to KC Wallberg acquiring the business in 2016. Hence, the complete meal was cared for in a sustainable way.

Health and lifestyle
The food philosophy that KC Wallberg represents, has proved to be medically healthy. In 2011, he met Mai-Lis Héllenius, professor at Karolinska Institutet. The meeting resulted in a book, ”Riktiga män äter sallad” (Real men eat salad), 2012. It was also a starting point in a wider sense, somewhat of a wake-up call, when KC Wallberg was confirmed that his ambition concerning produce and technique was of great value. Cooperating with Mai-Lis Héllenius also led to the award for Best hospital food in Sweden. A joint venture with a good friend, active within health and personal training, became the next project with the aim to inspire on a personal level. “Food for minds” was born, ahead of its time. Many other projects have seen the daylight since then, although none as initiated. The venture is to be continued.

Literature and teaching
KC Wallberg is a true entrepreneur in the field of food and wine experiences. His different business areas comprise everything from knowledge-based projects and tutoring to the production of conscious food in different shapes and steps. He is the author of four books, of which the latest, “Mitt Matrike” was awarded “Årets måltidslitteratur”, an acknowledgement of its significance.

Through unique, fruitful choices in life and substantial experience, KC Wallberg feels it only natural to provide insights and inspiration. He has performed as tutor at different educations, from amateur classes to professional level, within cooking. He has also been special adviser to Stockholms Yrkeshögskola, TEC, and guest lecturer at Umeå university, Sweden, and Cordon Bleu, London. During several years, he cooperated with Karolinska Institutet regarding health and lifestyle, which led to the epithet “chef of the future”, and also with health and food authorities in Sweden.

Presently
KC Wallberg is dedicated to and passioned about sharing knowledge. He now takes on a new project within information and learning. The concept is called Gastronoma – House of Gastronomy. A forum that will shed light to important subjects, promote interest in urgent topics and provide education, all within the food and wine sector. Objective knowledge and practical inspiration are key elements. Gastronoma will provide interesting educational courses in food and wine, seminars and workshops, always at an affordable rate. Gastronoma displays a complete profile – from serious topics to pure food joy.